The ball earth might be the biggest lie of all time. All of us were so conditioned from the very moment we were born to believe in the scientific infallibility of the ball earth theory that it is extremely difficult to break out of the lie.

This why it takes preparation to at least begin to question the globe earth theory. This is why most flat earthers go through a sort of initiation before they come to this biggest lie every told. They have gone through the sometimes difficult process of understanding all of the other lies we have been told. What would be a shocking revelation to most people —  for instance, the fact that the Sandy Hook shooting is a hoax — is pretty much old hat to a flat earther. In fact, flat earthers would consider most other hoaxes and lies to be low level issues that are actually used to divert attention away from the biggest lies.

If you don’t already know about the following lies, conspiracies and hoaxes, then you are most likely not going to be able to accept the abundance of evidence of a flat earth, and you will not be able to see the lack of evidence of the ball earth. I’m sure it is not exhaustive, but here’s the list…

— The Sandy Hook school shooting was a hoax. It is entirely possible that no one died at all, not even the supposed lone gunman, Adam Lanza.

— Almost every other mass shooting or bombing that is widely reported by the mainstream mass media are either carefully planned (and in some cases not-so-carefully planned) hoaxes with no real casualties, or are government-staged events in which there could be an actual fall guy and actual murders. The Aurora Batman shooting, the Ariana Grande concert,  Roseburg Oregon, the Cassidy Stay family shooting, the Boston Marathon bombing, Orlando Pulse, Columbine, the list goes on.

— 9/11 was an inside job. Duh. Israel was most likely heavily involved. Research not only Building 7, but Building 6 as well. It is entirely possible that no planes hit the two towers, and that what we think we saw was only on TV using special effects. It is also possible that some kind of high energy weapon, possibly in conjunction with controlled demolition charges, was used to bring down the multiple skyscrapers that came down that day.

— Cannabis has been demonized by the powers that be in order to keep this healing plant out of our hands so that we will continue to populate their hospitals, fund their Medical and Pharmaceutical industries, and just continue to get sicker and sicker in general. 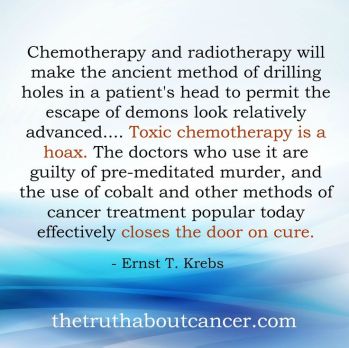 — There are many natural treatments for Cancer, including Cannabis oil, that are far and away better and less painful than chemotherapy and radiation treatment, which itself causes Cancer.

— The Federal Reserve is a private bank that is neither Federal, nor do they have any reserves.

— The Income Tax paid to the IRS in the United States is a lie and was established thanks to deception. There is no law in existence that says we have to pay a Federal Income Tax. The IRS is a private company that is not affiliated with the Federal Government in any way.

— Flat Earthers know that there are many disinformation shills on the internet and elsewhere whose purpose is to lure a person in with half-truths, while serving as a gatekeeper to keep the biggest lies, hoaxes and deceptions from being exposed, while at the same time steering people in the direction that they want.

In my opinion, these dis-info agents include: Alex Jones and anyone who appears on his Info Wars show, Joe Rogan, David Icke, Jesse Ventura, Ron Paul and pretty much every politician who has ever lived (with maybe some rare exceptions… maybe), Jim Marrs, the makers of the Loose Change film and any so-called “truther” associated with the film, Richard Gage of Architects for 9/11 truth, Ted Gunderson, Bill Nye the Science Guy, Neil Degrasse-Tyson, Brian Cox, and countless others.

Remember that shills and controlled opposition agents are everywhere, especially on the internet. And you should never be too shocked to find out that any so-called “leader” of any kind of “movement,” such as the Flat Earth movement, turns out to be controlled opposition, no matter how convincing he seems to be. If you get fooled by one of these dis-info agents, don’t worry… we’ve all been taken in at one time or another. Just know that the best thing to trust is your own God-given common sense.

— Both sides of the world’s major wars are controlled by the same group of people who profit off of both sides, win or lose. And many of the major wars begin with false flag events (The Gulf of Tonkin incident, 9/11) to rally the general public to agree that going to war is necessary.

— Not every Flat Earther would agree, but many do not believe that the so-called Holocaust happened the way that history books and mass media portray. We are bombarded all the time with propaganda from the  mainstream media (articles, books, television programs, movies) about the events surrounding World War II.

— The theory of evolution as formulated by Charles Darwin and forced onto the public by “Darwin’s Bulldog” Thomas Henry Huxley, among others, is a 100% lie purposefully conjured up by free-masons in order to hide the fact of intelligent design by an intelligent creator. The reasons for the creation of the theory of evolution are very similar to the reasons for the false globe earth theory, one of which is to simply confuse and throw humanity off balance and separate humanity from their innate common sense, so that we rely on “scientists” to tells us about the world and about ourselves instead of using our own senses, feelings, and experiences.

— Dinosaurs are a hoax and have never existed. I started to question this one even before discovering the flat earth topic. When I was a kid I was a big dinosaur fan, with “Triceratops” being my favorite. But then a few years ago I started to consider the existence of these massive creatures to be ridiculous. Take one “Brontosaurus” for instance: how much vegetation would that creature have to eat each day to stay alive? Now think about the idea of hundreds if not thousands of dinosaurs all roaming around in the same area… How could there possibly be enough vegetation growing in one place to support all of these dinosaurs? They would eat all of it in one day. Anyway, there are many other things that don’t add up, such as the fact that the existence of dinosaurs were postulated by a Darwin evolutionist before a bone was ever found… then after the hypothetical creature was imagined, the first ever dinosaur bone was found soon after. And this was in the 1800’s. Why were no “dinosaur” bones ever found by anyone else in human history before the 1800’s? Also, a full dinosaur skeleton has admittedly never been found. What they do is take one bone — even just a large tooth — and construct an entire imaginary creature’s skeleton around that one bone. Also, why hasn’t the average person ever stumbled across a dinosaur bone? Shouldn’t there be literally millions of these bones all across the Earth?

Do you actually believe that this contraption below was able to land on the Moon? And since NASA is lying about that, how can we believe anything they say? If they have the audacity to lie on a scale that large, doesn’t it then call into question everything they have ever said and done? Their claim that the Earth is a ball, for instance? And then doesn’t it follow logically that we then have to question the motives of any so-called “scientist,” government official, or anyone in a position of authority who has touted the goodness of NASA? 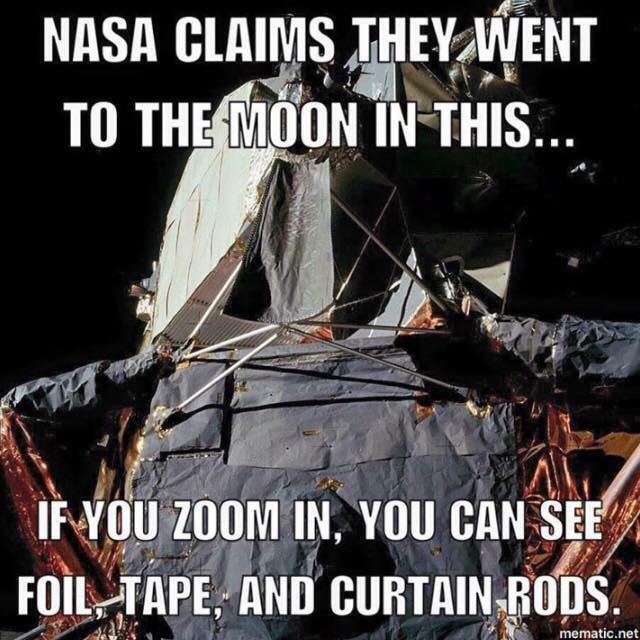 If you examine these two supposed images of Jupiter, one from 2014 and one from 2016, you will see that the cloud formations on the this giant so-called “planet” did not change in two years. I don’t know, maybe “gravity” explains why that is, as it seems to explain everything else. And check out that fake, magical, electrical light-show thing going on in the 2016 image. They really think we’re dumb (unfortunately, they’re kind of right about that). 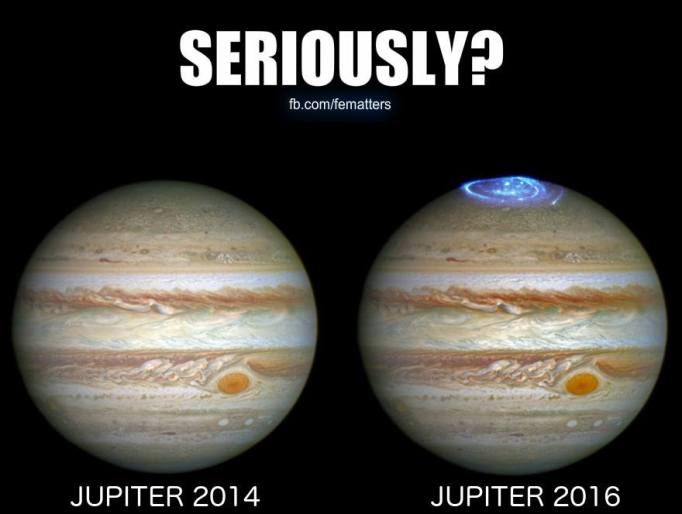 This meme below is self-explanatory. It is actually admitted by everyone that 99% of all international internet communications are handled by a vast network of undersea cables — check out my article about that here. If you asked most people how internet signals were handled across oceans, they would say “satellites.”

In this image below, the famous supposed photo of Neil Armstrong’s first footprint on the Moon does not match the sole on the foot of his official spacesuit that is on display… not even close in fact.

Here below is a press conference following the return of the first astronauts to land on the Moon. Are they just tired? Or are they tired of lying?

How exactly would a rocket thruster work in the vacuum of space? And by the way, at what magical point does the atmosphere of Earth turn into the airless vacuum of space? 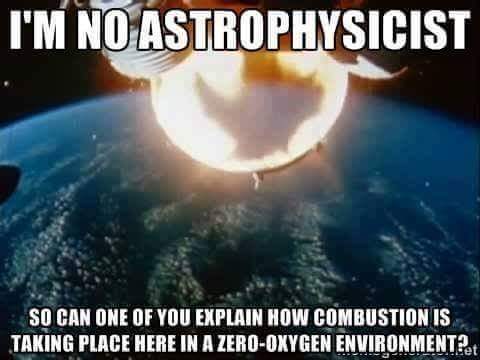 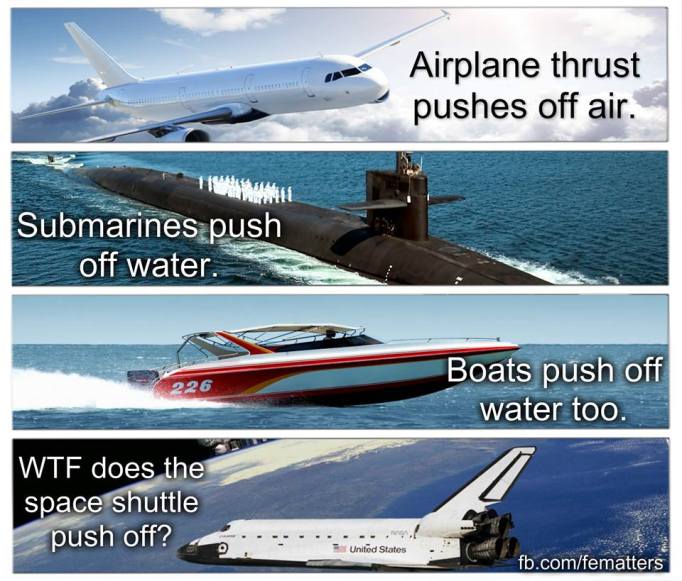 And here is lying free mason Buzz Aldrin being corrected as to how the Lunar Module worked. You’d think he would know that contraption inside-out, wouldn’t you?

And if you did not know, astronaut Gus Grissom was murdered after he stated publicly that basically there was no way we were going to land on the moon anytime soon. Here’s the story in a very brief nutshell…

NASA claims that they slow down the landing module with parachutes. No, really, that’s what they claim. 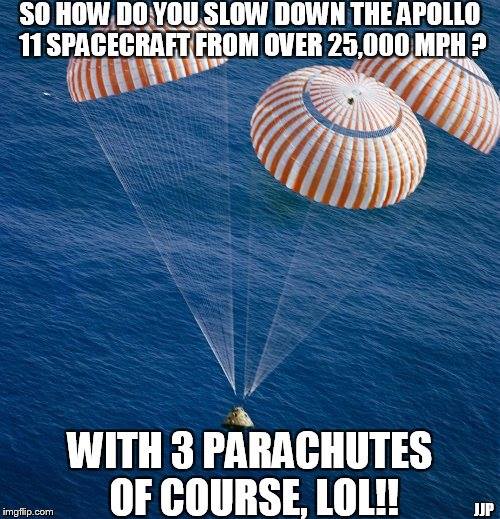 They expect us to believe that they had time to play some golf on the Moon, but not much time for taking very many photos.

They expect us to believe that they took a car to the moon? How dumb are we? Really dumb, apparently. 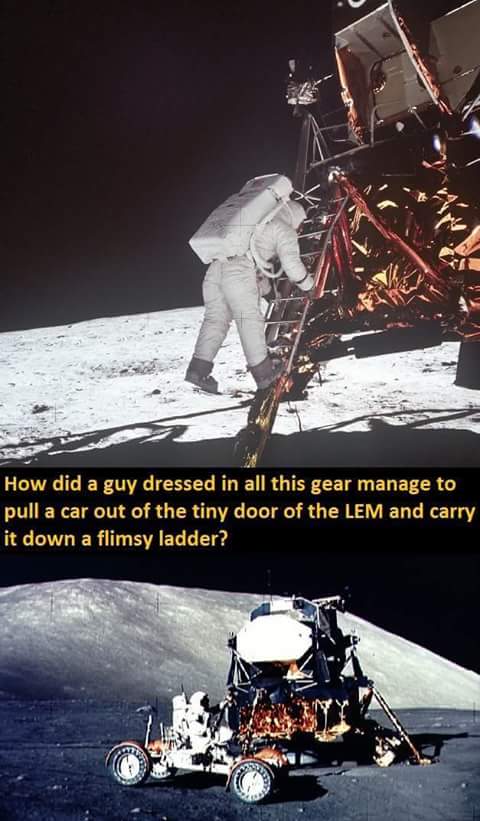 There have been multiple instances in which NASA astronauts and even President of the United States Barrack Obama have made strange comments revolving around the idea that we are only “able to fly in low Earth orbit. That’s the farther we can go.” Wait… what? Didn’t NASA travel to the Moon at a supposed distance from Earth of 238,900 miles, which is way past “low Earth orbit.” And by the way, there’s no such thing as “low Earth orbit.” Are they basically admitting that it never happened? That it was a hoax?

An outline of the Disney character “Pluto” can actually be seen on an official image from NASA of the so-called planet Pluto. 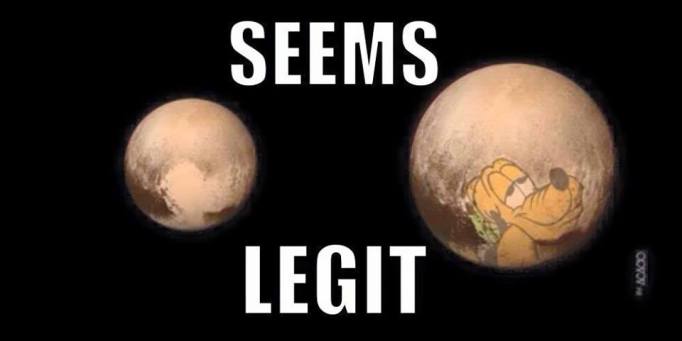 NASA claims that the International Space Station is on average about 240 miles up from the surface of the Earth. Something would have to be pretty darn big to be seen from 240 miles away. The problem is, they claim that the ISS is only about as big as a football field (see below). Yet another discrepancy that they didn’t think of. But you see, all lies eventually fall apart…